What has the Battle of Vienna given us? 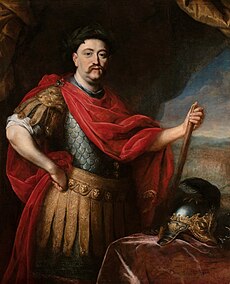 12 September this year was the 335th anniversary of the Relief of Vienna – the time when once again a wave of savages from the east crashed against the Polish breakwater protecting European civilization from its doom. And also the moment which saw (or heard) the famed Polish Winged Hussars' swansong. Or so, at least, I've been taught at school.

Okay, but this blog is not about geopolitical or military myths; it's about culinary myths. So let's see how the Victory of Vienna helped enrich our menus. Well, if we judge the importance of a historical event by the number of culinary myths associated with it, then the Battle of Vienna was certainly a momentous one indeed. And should all these legends be true, then whether you're having borscht with potatoes in Poland or Ukraine, washing down you breakfast croissant with coffee in Vienna or spreading your bagel with cream cheese in New York, you should be grateful to King John III Sobieski for his spectacular victory over the Ottoman Turks.

The fact is, as we can see, assertedly incontestable. So, assertedly, John III got a bag of potatoes from Emperor Leopold I in return for saving Vienna from the Turks. Because, you know, everybody knows the Poles love their spuds, so the Polish king must have been happy, right? Except that the Poles back then not only didn't love potatoes yet, they had absolutely no idea what they were. We don't know whether John was happy to receive such a magnificent gift, but we do know that he (assertedly) sent the taties to his wife, asking her to have them planted in their yard. 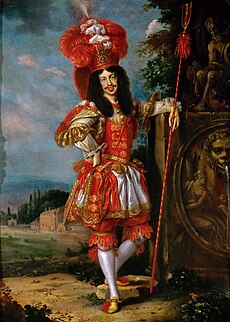 The man who actually planted them was the Wilanów gardener Paweł Wienczarek, who later transferred his potato-planting knowledge to his son-in-law, Jan Łuba. The latter is known for being the first in Poland (during the reign of the next king, Augustus II) to grow potatoes on a larger scale in his garden at Nowolipki near Warsaw and sell them as a luxury item to the royal and magnate kitchens. At least this is what Orgelbrand's 1868 encyclopedia says. Prof. Zalewski, already quoted above, adds that Łuba imported whole wagons of seed potatoes from Saxony, as the king "demanded a platter of potatoes (fried whole) with his every dinner", citing (wait for it) "a well-informed historian".

Jędrzej Kitowicz, an 18th-century priest known for his account of everyday life in Poland during the reign of Augustus III, also pointed to Saxony as the place where the "earth apples" were imported from. Potatoes were not an immediate hit, according to him. Some priests, he wrote, spread around the opinion that these tubers were disgusting in taste and unhealthy. And the reason they were doing this was that they were afraid that someone might inadvertently commit sacrilege by mistakenly adding potato starch instead of wheat flour to the dough for altar bread.[1]

But let's go back to Sobieski. The truth is, even if he had received a bag of potatoes from the emperor as a present, it's still unlikely that he ever developed a taste for them. In those times rich people (and they were the only ones who could afford potatoes) found the idea of eating something that grows or lives in dirt repulsive. They treated the potato as a botanical curiosity and had it grown as a decorative plant, but were completely uninterested in the dirty, unshapely tubers. There was an exception to their distaste for things found in earth, though: truffles. There must have been a clever potato dealer who persuaded his customers that the potato is kinda like a truffle, as the German word for "potato"(borrowed into some dialects of Polish as well) is Kartoffel, which comes from tartufo, the Italian word for "truffle". It took about a hundred more years before potatoes got cheap enough that the peasants could discover the advantages of this versatile vegetable, which you can not only cook and eat in so many ways, but also use to make starch, fodder and, of course, vodka. 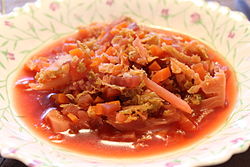 Another vegetable, which seems indispensable to traditional Polish peasant cookery, but which actually appeared in Poland relatively late, is the beetroot. Beets were grown in the Mediterranean Basin already in antiquity, but more for their leaves than for their roots – which at the time were whitish, long, tapered, bitter and considered inedible. The beet variety with a dark red, round and sweet taproot did not appear in southern Europe before the 12th century and it only reached Poland in the 16th. Ukrainians may have discovered it even later:

Which means that if not for John III's relief of Vienna, Ukrainians would not have come up with the idea to cook their borscht with beetroots instead of hogweed (which was the original ingredient; in fact, the very word "borscht" comes from the Slavic name for hogweed). Which is great, only that, according to Nikolai Burlakoff,[2] there is another version of this legend as well. It turns out, as in Radio Yerevan news, that it wasn't the Zaporizhian Cossacks, but the Don Cossacks; that they didn't serve in the Polish army, but in the Russian army; they weren't marching towards Vienna, but towards Azov; and that they weren't going to save it from being captured, but to capture it (which happened in 1695).

Whatever the case, more reliable information about beetroot-based borscht does not appear before the 19th century. But who knows? Perhaps the Cossacks did add sautéed beetroots to their borscht as early as the late 17th century? 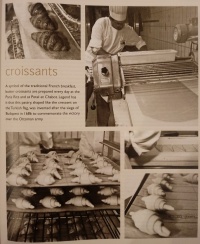 A page from an English-language edition of Larousse Gastronomique

One blogger, who signs his posts as "bfaure", displays quite a healthy approach to this kind of legends. This is how he prefaces another one of them:

According to this legend, while the Cossacks were picking beetroots on their way to Vienna, the city itself, two months into a siege, was starting to face starvation – a common trope in culinary myths. Nevertheless, bakers continued to work their night shifts to provide the inhabitants with their daily bread. One of them (said to come from the German city of Münster) happened to hear some weird noises from underground. As it turned out, he discovered a tunnel which the Ottomans had dug under the city walls. In recognition of this contribution to the war effort, the emperor awarded Viennese bakers the right to bake rolls in the shape of the Turkish crescent. Thus the kipferl, or the Viennese croissant, was born. Although, if we were to believe Larousse Gastronomique, the bible of French gastronomy (I will be coming back to this tome, as it's a wonderful source of culinary myths presented as facts), the croissant was actually created three years later to celebrate the capture of the Ottoman city of Buda (or what is now Budapest) by Christian forces. 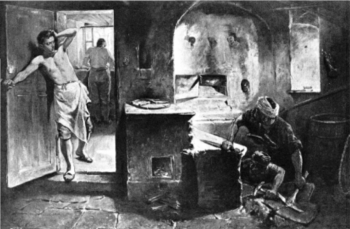 A Münster baker discovers a Turkish tunnel in Vienna 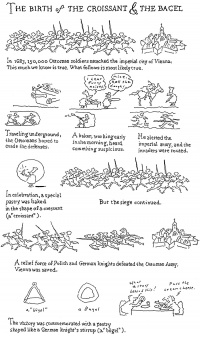 The Birth of the Croissant & the Bagel by R.O. Blechman

This legend has its Jewish variant as well, which says that Viennese Jews, in gratitude to the Polish king and his Winged Hussars, baked special rolls in the shape of a stirrup. And as the German word for "stirrup" is Bügel, the rolls have been dubbed "bagels". The bagels would later travel all the way to New York, where a sandwich of a halved bagel spread with cream cheese and covered with a slice of lox (smoked salmon) became the favourite snack, first among American Jews, and in the second half of the 20th century – among Americans in general.

Of course, you can always count on Americans to try and cross-breed two good things to get something supposedly even better. This is how one Brooklyn bakery in 2014 created the cragel, or a croissant and bagel in one.

The legend fails to explain one thing: why would the Viennese Jews need to invent the bagel, if Cracovian Jews had been already baking it for years? The oldest known mention of the Jewish bagel comes for sumptuary laws issued by the Jewish community of Cracow in 1610. Mentions of the obwarzanek (pronounced awb-vah-ZHAH-neck), a Polish ring-shaped bread closely related to the bagel, date back even further, to the early 15th century (I promise to write how to tell a bagel from an obwarzanek and an obwarzanek from a pretzel in a separate post). But according to Maria Balinska,[3] the association between King John III and the bagel is not entirely unfounded, if not as romantic as the legend would have it. As it happens, the saviour of Vienna was the first king of Poland who did not confirm a privilege, first issued by King John Albert in 1496, which gave the Cracovian guild of bakers (Christian only) a monopoly for baking wheat-flour bread and obwarzanki. What it meant is that Jewish bakers could finally bake their bagels legally and sell them openly to both Jewish and Christian customers. No wonder the Yiddish phrase in meylekh Sabetskis yorn (literally, "in King Sobieski's time") is synonymous to "good old days". 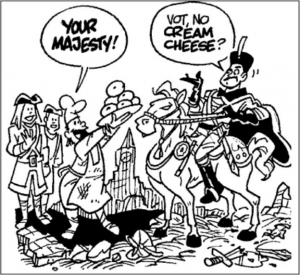 From a commercial leaflet of the Building #19 discount store chain 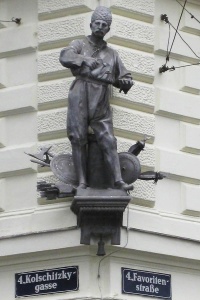 Statue of Franz Koltschitzky in Vienna

Let's return to the croissants for a while.

That's right, what better to wash down you croissants, bagels and myths with, if not coffee? And if we're talking about coffee, then we cannot forget Georg Franz Kolschitzky (or Jerzy Franciszek Kulczycki in Polish) who served the Christian coalition forces as a spy and interpreter. If you're not interested in biographical details, please skip the next paragraph. 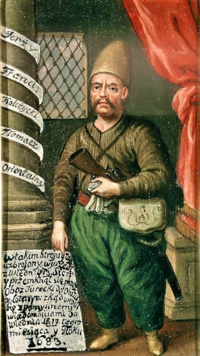 "Jerzy Franciszek Kulczycki, oriental interpreter.
In this costume and thus armed, he left Vienna on 13 August
and passed through the Turkish camp to the camp of the duke of Lorraine,
whence he returned with propitious news to Vienna on 17 August 1683."

The legend about Koltschitzky says that, as well as the prizes mentioned above, the king of Poland gifted him some of the goods looted in the Ottoman camp, including bags of something that has been originally taken for camel fodder. Familiar with Turkish customs, Koltschitzky immediately recognized the contents of these bags as coffee beans. So equipped, he opened the first café in Vienna, called Hof zur Blauen Flasche, or the Blue Bottle House. For marketing reasons, he served his patrons in Turkish garb – perhaps the same as the one he had used to carry messages between the besieged Vienna and the camp of the allied forces. He is also credited with the idea of making coffee more palatable to Christians, unaccustomed to the bitter brew, by adding a splash of milk and honey.

But even to this legend there is a counterlegend, according to which Koltschitzky did not open the first coffeehouse in Vienna, because he had been beaten to it by three years, by an Armenian (or maybe Greek?) merchant named Johannes Diodato. That said, Koltschitzky was without a doubt one of two Poles – alongside Franciszek Trześniewski, author of Vienna's "unpronounceably good" open sandwiches – who made great contributions to Vienna's culinary scene. Unless Koltschitzky was Ukrainian, that is. Or Serbian.

That's all for today, but do let me know in the comments section what you would like to read more about. Is it borscht, bagels or coffee? So long! 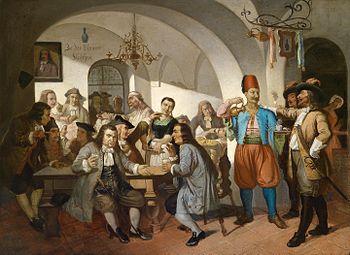