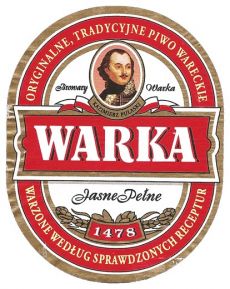 The town of Warka (pronounced: vaR·kah), about 50 km south of Warsaw, is best known for its brewery and the beer that is made there. The modern brewery, opened in 1975, currently belongs to Grupa Żywiec, which is majority-owned by Heineken International. It brews a run-of-the-mill pale lager branded as Warka Jasne Pełne, as well as its stronger, maltier version called Warka Strong.

There were times, however, when the beer brewed in Warka was considered the best in the region of Masovia and even all across Poland. Warka's beer-brewing traditions date back to the Middle Ages; even the town's very name comes from Polish beer terminology and refers to the amount of wort brewed from a single batch of malt. The oldest known mention of the Warka brewery comes from 1478, the year when Duke Boleslav V of Masovia granted the town a monopoly for supplying beer to his own court and to the Warsaw town hall. Warsovians must have really liked the brew, as even two hundred years later Jakub Teodor Trembecki wrote in his poem (about how much alcohol is better than tobacco) that Warsaw lived on Warka beer. And at the beginning of the 19th century, Samuel Bogumił Linde, who compiled the first Polish-language dictionary, could provide only one example of how to use the adjective "wareckie" ("of Warka") in a sentence: "dobre piwo wareckie", "good Warka beer".[1]

None of those writing about Warka beer can resist the temptation to cite the old anecdote about how this beverage saved the life of Pope Clement VIII. Let's take the first example that comes to hand and see what Polish Wikipedia has to say on this topic:

Now, Piva may not mean much to you; unless, that is, you've ever had a beer in a Slavic country, in which case you know that "piva", "pivo" or "piwo" is the word for "beer" in every Slavic language. It comes from the verb "to drink", which shows that, for Slavs, beer is, by definition, the thing that you drink. Also notice the "saint's" alternative name, Biera, which bears resemblance to "Bier", the German word for "beer".

Now back to the story. As is typical for Polish Wikipedia, the legend is quoted uncritically and without any citation of a reliable source. Oh, but it's just a legend, so who cares if there are any historical sources to back it up? The legend, in the same or slightly modified wording, has spread across the Internet. You can find it, for example, on the official website of the town of Warka (where at least a source is cited – as Wikipedia). The anecdote predates the Internet, though, and can be found in printed sources as well. Tadeusz Żakiej, a musicologist who used to write about food under a double nom de plume as Maria Lemnis and Henryk Vitry, included the following version in his tale of Old Polish cuisine: 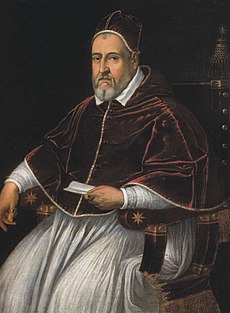 As you can see, the author has neglected to inform us what illness the pope was suffering from or whether he came out of it alive. Is it because this final fragment seems least credible? After all (I'm not a doctor, but) "ruptured ulcer" sounds more like a serious complication than a prognostic of imminent recovery.

And if we've got two versions of the same legend, then maybe there are more? Let's keep on looking. On the Virtual Warka website we can read the following:

So we've got a ruptured ulcer again, but this time not in a pope, but in his envoy! The man in question is certainly Cardinal Enrico Caetani, whom Clement VIII sent as a legate to Poland and tasked him with convincing King Sigismund III to join a Habsburg coalition against the Ottoman Empire. The mission failed, by the way, as Maximilian III Habsburg was still claiming the Polish throne for himself after an inconclusive royal election. 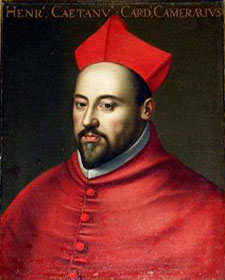 So now we've got a riddle to solve: was it Clement or Caetani? Piva or Biera? To find out, we need to dig into somewhat older sources. Let's see a source from 1888 and see if it gets any clearer.

Curiouser and curiouser! Firstly, the description of Warka beer as "excellent, whitish, piquant, reminiscent in flavor and color of wine" looks familiar, doesn't it? Ah yes, it was Polish Wikipedia that attributed these words to Clement. Now it turns out it was Caetani's opinion after all. And secondly, it was neither Clement nor Caetani who suffered from the throat ulcer, but Cardinal Ferdinando Maria Saluzzo, who lived a century later and served as the last papal nuncio to pre-partition Poland. So there, puzzle solved! 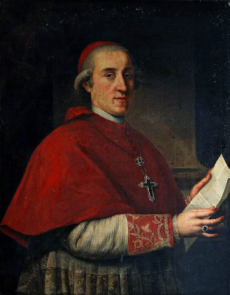 And besides, does it matter whether the anecdote tells of this or that prelate? What matters is that its every version praises the fine Polish beer of Warka, doesn't it?

Could it be that some foreigner grew so fond of Warka beer's legend that he began to tell the same story about some swill brewed in Brussels? You could think so, if it wasn't for the next paragraph in the same source:

So the Brussels version was told by a Pole! And not just any Pole, but Bishop Józef Andrzej Załuski, a famous 18th-century erudite and bookworm, co-founder of Poland's first public library. He must have known what he was talking about, mustn't he?

And still, if we go back to even older sources, we will see that our original assumption was correct; the Brussels variant was just a modification of an anecdote which was originally about Warka – even if foreigners sometimes misspelled it as Barca.

The oldest version of the legend I was able to find makes no mention of the alleged saint whatsoever. It talks only of la sainte bière de Varka, "the holy beer of Warka". The following excerpt comes from François-Paulin Dalairac's account of his travels in Poland, originally published in 1698.

The cardinal's name does not appear in this account. It couldn't have been Saluzzo, as he hadn't even been born in 1700. Was it Caetani then? Perhaps, but the puzzle's final solution keeps eluding us.

And maybe you know of some other source which could shed some more light on this subject? Or maybe you have your own guesses? Let me know in the comments. If you know other anecdotes related to Polish cuisine and wonder how much truth there is to them, then do let me know as well.