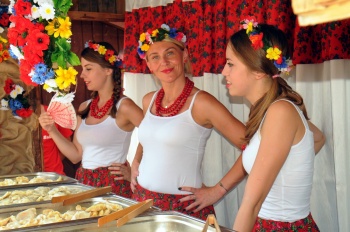 A stand at Pierogi Festival in Cracow

If you know anything about Polish cuisine, then you must have heard of (and, hopefully, sampled) pierogi, the delicious Polish member of the large and diverse family of stuffed dumplings. Possibilities for the filling are limited only by the cook's imagination, but the typical stuffings include seasonal fruits like strawberries or blueberries, and farmer cheese with sugar for the sweet varieties, and for the savoury ones: ground meat, sauerkraut with mushrooms, and farmer cheese with potatoes and fried onions. The latter kind (so simple, yet so tasty!) is known in Polish as pierogi ruskie, suggesting an origin not in Russia (as some folks, even in Poland, might think), but in Kievan Rus – a medieval civilisation centred in what is now Ukraine. Of course, pierogi are still as popular in Ukraine as they are in Poland, except, over there, they go under the name varenyky.

This year, the 16th Pierogi Festival took place in Cracow's Mały Rynek (Lesser Square). It always happens around August 17, that is, the day when the Catholic Church remembers Saint Hyacinth, also known as Jacek Odrowąż. Authors of the festival's best pierogi are awarded a statuette of the holy man, who is often called the patron saint of pierogi. Other pierogi celebrations are held in other parts of the country – invariably on or near Saint Hyacinth's Day.

So what does the Dominican friar from Cracow have to do with the flavorful farinaceous dish? What do the Internet and popular publications have to say on this topic and what can we find in historical sources? Let's find out!

A statuette of Saint Hyacinth at Pierogi Festival in Cracow

How much truth is there to it? Let's start with a short introduction to Saint Hyacinth himself (if you're easily bored with biographical details, please skip this paragraph). Jacek Odrowąż (pronounced YAHT-seck aw-DRAW-vawnsh), to use his Polish name, was born around 1183 in Kamień, Silesia, in the affluent Moravian-Silesian Odrowąż family. His uncle, Iwo Odrowąż, was a bishop of Cracow and a chancellor at the court of Leszek the White, Duke of Cracow, so it comes as no surprise that Jacek was educated at the cathedral school of Cracow, under the tutelage of Wincenty Kadłubek. Once ordained priest, Jacek continued his studies at the University of Bologna. During his visit to Rome, he met Domingo de Guzmán, or Saint Dominic, the founder of the Dominican Order. By the time he returned to Cracow, he had become a Dominican friar himself. On his way back he founded a new Dominican monastery everywhere he stopped – in Austria, Bohemia, Moravia, Silesia and finally in Cracow, at the Holy Trinity Church. He would later work as a missionary in Prussia and – what matters to us – in the homeland of pierogi (or the ruskie ones at least), that is, in Rus, in the years 1228–1233.

Our chief source of knowledge about Jacek is the hagiography penned by Lector Stanislaus at the Holy Trinity Monastery, entitled De vita miraculis sancti Jacchonis (The Miraculous Life of Saint Hyacinth). Written for the purpose of presenting the case for his canonization, the work is focused more on the miracles attributed to Hyacinth than on the details of his earthly life. Interestingly, neither the biographical, nor the miraculous part, contains any mention of pierogi.

Fortunately, religious people have the acquired skill of reading between the lines what the author never wrote. Just as you can interpret the Purgatory or the Trinity out of the Holy Scripture, so you can read pierogi out of Saint Hyacinth's CV. Father Tomasz Gałuszka, a Dominican from Cracow, will show us how:

If you dig deep enough, you will find much older versions of both legends. What they all have in common is that the pierogi are always tacked on at the very end of the story, with little to do with the actual plot. Here's an example from a sermon attributed to Father Felix of Sieradz, a 16th-century prior of the Cracovian Dominicans:

What was to be demonstrated.

Whoa, whoa – someone might say – there are other things you can make out of flour as well. What about bread, a much more obvious, one would think, flour-based product? Or cakes! Why not cakes?

In his Book of Polish Proverbs, Samuel Adalberg cites a number of sayings about Saint Hyacinth, most of which have to do with one of two farinaceous, or flour-based, dishes – flat cakes and pierogi.

The Polish word placek, which I've rendered as "flat cake" above, may refer to a variety of flat-shaped, flour-based foods, from tarts to pancakes. Whatever it means, it rhymes with Jacek, the Polish equivalent of "Hyacinth". This makes the association between the saintly friar and all kinds of flat cakes almost obvious. With pierogi – not so much. On the one hand, we've got the association, dating back to the Middle Ages, between Saint Hyacinth and food of any kind – due to his reputation as feeder of the poor and to his liturgical feast day coinciding with harvest. On the other hand, associating him with this particular dish may have been humorous from the beginning; a joke based on the absurdity of linking the venerable figure of a saint with the most mundane pierogi.

"O Saint Hyacinth of Pierogi!" is a now largely forgotten, but once widespread Polish exclamation expressing surprise, startlement or annoyance – usually unrelated to food. We can find one of many examples of this usage in a 19th-century Polish translation of Don Quixote:

It seems to be a minced oath – a saying that is devoid of any deeper meaning, but is derived from a religious invocation that has been altered either to avoid blasphemy, or – in modern times – as a joke. In English we might exclaim "holy smokes!" instead of "Holy Ghost!", "oh my gosh" in place of "oh my God!", or "zounds!" in lieu of "Christ's wounds!" I find it quite likely that "Saint Hyacinth of Pierogi" is the result of a similar alteration and an example of a medieval absurdist sense of humour. The legends meant to explain it arose later.

That's all for today. In the next episode we will continue the topic of saints and their role in the history of Polish food and drink. And as for pierogi and some (modern) surreal humour...

The Polish Ministry of Agriculture and Rural Development maintains a List of Traditional Products, which includes pierogi kościelnickie, or pierogi from Kościelniki, the village where Saint Hyacinth allegedly performed the miracle of saving the hailed-out crops. In Kościelniki, the filling for savory pierogi is traditionally made of cheese seasoned with a herb commonly known as ground-ivy. It should be noted, though, that "traditionally" doesn't necessarily mean "for centuries past"; according to the Traditional Products Act (Dz.U. 2005 Nr 10 poz. 68), "methods that have been in use for at least 25 years are considered to be traditional methods of production."

What follows is a recipe for ground-ivy pierogi from Mr. Waldemar Sulisz of Lublin, although I don't know to what extent it resembles the recipes from Kościelec.