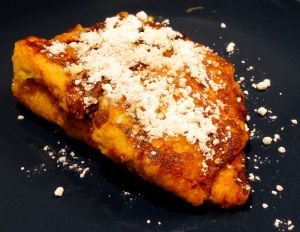 What dish is this? You're gonna find out at the end of this post.

Cooking according to centuries-old recipës can be a real challenge even for experienced chefs. There are, however, dishes so simple that even beginner cooks could hardly fail to get them right – whether hundreds of years ago or today (let alone today, I should say, with modern kitchen tools at our disposal). So here's a handful of easy recipës I've picked for culinary novices from the oldest cookbook ever printed in Polish.

The book in question, first published in 1682, was written by Stanisław Czerniecki (pronounced: stah·nee·sWahf cheR·nyets·kee), a steward and chef at the court of the princely house of Lubomirski. He gave it a bilingual (Latin-Polish) title, Compendium ferculorum, albo Zebranie potraw (both parts meaning "A Collection of Dishes"), but the contents were entirely in Polish (contrary to what Ms. Mary Ellen Snodgrass suggested in her Encyclopedia of Kitchen History, where she described Compendium ferculorum as Poland's "Latin standard"[1]). Czerniecki was well aware that his was the first cookbook to be published in his native tongue. "As no one before me has yet wished to present to the world such useful knowledge in our Polish language," he wrote in his opening line, "I have dared, […] despite my ineptitude, to offer my […] collection of dishes to the Polish world."[2] The author divided his work into three chapters of about one hundred recipës each, for meat dishes, fish dishes and other dishes, respectively.

The recipës, though, are not easy to follow. First, they're in Polish, which may be an inconvenience, if you don't speak the language. But even if you did, you'd still have to wade through 17th-century Polish spelling, interpunction and typeface. Let's take the example below. You could probably make out the name of the dish, printed in roman type, but what about the actual recipë, written in blackletter?

But don't worry; I've translated it for you:

That's better, isn't it? But I bet you'd still have a hard time actually cooking from this recipë. Where's the list of ingredients? Where are the quantities and proportions? What about caloric contents? Cooking time and temperatures? How many people does it serve? We've got used to taking certain elements of a culinary recipë for granted, but it turns out that in the 17th century they just hadn't been invented yet. 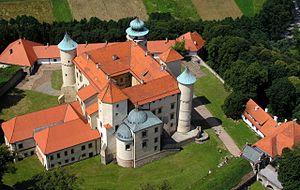 The castle of Nowy Wiśnicz, which once belonged to House Lubomirski; this is where Stanisław Czerniecki worked as a steward and chef, and where he wrote down his recipës in the first cookbook to be printed in Polish.

Another thing we take for granted is that it's usually the same person who buys a cookbook, reads it and cooks from it. In the 17th century, though, it was quite normal for these three roles to be separated. The book would have been purchased by someone who could afford it, that is, a rich nobleman or a magnate (the Polish equivalent of an aristocrat). Or, rather, it would have been his wife, the lady of the house. She would have bought the book not for herself, however, but for the head chef (or "master cook") she'd had employed. It was the head chef's job to manage the entire kitchen staff, order the necessary ingredients from external suppliers and make decisions about what would be served on the lord's table (having agreed the menu and the costs with the lady). So the recipës in the cookbook would have been read by the head chef – an experienced professional who didn't need all the proportions, temperatures and cooking times, because he already kept this knowledge in his head. But here comes another twist: he would have read the recipës aloud – not to himself, but to the kitchen staff, who would carry the instructions out. We can tell this by the grammatical forms used in the book; it's always the singular second-person imperative, indicating a direct order that you could issue to your subordinate, but never to a magnate or to his wife who actually owned the book. Czerniecki, for example, would have never addressed his own employer, Princess Helena Tekla Lubomirska, by the familiar "ty" ("thou"), but consistently called her "Your Princely Grace, my Most Charitable Lady and Benefactress".

Let's go back to the recipë. What do we have here? Stewed meat with sweet, sour and spicy seasoning; taste combinations that most Poles today would consider typical for Indian or Thai cuisines, but never for Old Polish cookery. And yet, this is exactly the kind of cooking that the Polish lords of yore would have priced the most and this is what we will find throughout Czerniecki's cookbook. So does it even make sense to recreate these old recipës, if the final effect may well turn out inedible to our modern palates?

Don't worry: among more than 300 recipës contained in Compendium ferculorum you can find a few dishes so simple that they haven't changed all that much throughout the ages and their recipës look surprisingly familiar, even if written in a rather old-fashioned style. These are mostly egg-based dishes, so they probably have been around about as long as people have been raising chickens. Let's start with the most trivial recipë, which is that for scrambled eggs:

Today we would rather use a teflon pan than a clay pot, but otherwise the recipë hasn't changed one bit. The dish is so pedestrian that it's weird the recipë ever found its way into a cookbook written for master chefs working at magnate courts.

If you deem the scrambled eggs to easy for you and would like to try something a tad more challenging, then check out this recipë for thin pancakes, which are know in English as crêpes:

And here's one more egg-based recipë; this one is for a kind of sweet omelette, which Czerniecki refers to by a now old-fashioned Polish term, "grzybek", or literally "a little mushroom":

There's a breakfast dish popular with Polish college students that is known under the fancy name, "jajecznica na winie", which literally means "scrambled eggs on wine". This is a joke name, of course; which college student would waste good wine (or even not so good wine) by adding it to scrambled eggs? The name actually comes from the expression "co się nawinie", meaning "whatever is at hand", which is exactly what ingredients are added to the dish (other than the mandatory eggs, that is).

And yet, we can find in Czerniecki's cookbook, beside the "simple scrambled eggs", a recipë for "jajecznica z winem", or "scrambled eggs with wine". This time, it's no joke; it's an egg dish made with actual wine. Here it goes: 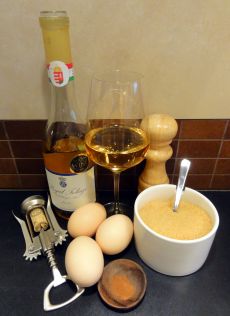 The last instruction ("do not stir") indicates that it's not really scrambled eggs after all, but again a kind of sweet omelette; apparently, the word "jajecznica" had a broader meaning in Czerniecki's times than it has today.

I decided to try this recipë out myself. I used three eggs, a teaspoon of sugar, a pinch each of salt and cinnamon, and ⅓ glass of wine. Hungarian wine was the most popular with 17th-century Poles, so I chose a sweet Tokay for this dish. 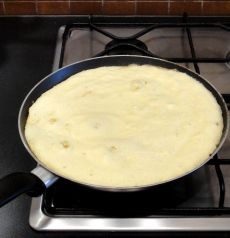 Egg-and-wine mixture poured onto a pan

I beat the eggs with the pinch of salt, then I added the sugar, cinnamon and wine, and poured the whole mixture onto a butter-greased pan. The original recipë doesn't call for raisins, but I figured they wouldn't make the dish any less authentic and added them as well (Czerniecki cautioned only that raisins "should solely be added to dishes meant to be sweet lest one err against one's culinary training"[3]). 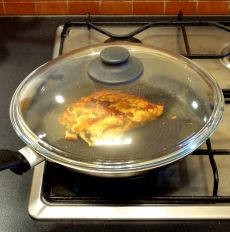 The egg batter was quite fluffy at first, but then quickly collapsed, which, I believe, was caused by the addition of wine, as this had never happened to me in regular omelettes. At least it was easy to fold the omelette in half and even in quarter. 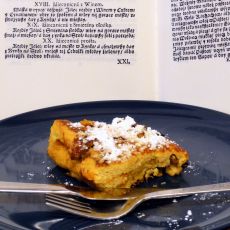 The final effect being eaten

I fried it just a little more, flipped onto a plate (taking advantage of using a teflon pan rather than a clay pot) and dusted with powdered sugar (or "sugar flour", as Czerniecki would have called it).

I liked the distinctive winey aroma, which subtly contrasted with the sweetness of the sugar. And, what's also important, I was quite filled with this simple breakfast.

If you'd like to take a look at the original 1682 edition of Compendium ferculorum, then scans are available at Polona, the official website of the Polish National Library. But there's even better news: you can buy a modern English translation, with Prof. Jarosław Dumanowski's commentary, published by the Palace Museum of Wilanów as part of the Monumenta Poloniae Culinaria series: