The Christmas-carnival period is a time when Poles eat particularly large amounts of bigos – assorted meats that are chopped up and stewed for hours with sauerkraut and shredded cabbage. It's a dish that you can prepare in ample quantity in advance, then freeze it (formerly, by simply storing it outside; today, in a freezer) and then reheat it multiple times, which – it is known – only improves the flavour. Bigos (pronounced: bee·gawss) is commonly regarded as one of the top dishes in the Polish culinary canon; one would be hard pressed to name a more typically Polish food. This is how American food historian William Woys Weaver described it:

But is the bigos, as we know it today, really the ancient and specifically Polish dish we take it to be?

I'm sorry to report that etymologists agree: this epitome of Polish cuisine is referred to by a word of foreign, non-Slavic and – what's even worse – German origin! They are not certain, though, which German word exactly the Polish "bigos" derives from, but they have no doubt that some German word it is. Aleksander Brückner, a famous prewar scholar of Slavic languages, maintained that "bigos" comes from German "Bleiguss", or "lead mold". The idea was that if you pour molten lead on water (as many Poles still do with wax for divination on Saint Andrew's Eve), you're going to get a shape that resembles bigos. Other linguists are quite unanimous in their view that this etymology makes no God-damned sense.

Suggestions that are somewhat more logical from a culinary point of view include the archaic German verb "becken", "to chop", and the Old German noun "bîbôz" (or "Beifuss" in modern parlance), which refers to mugwort, a plant once used for seasoning. Others propose the Italian "bigutta", or "pot for cooking soup", which supposedly entered Polish via German. But the etymology thought to be most likely is that "bigos" derives from "bîgossen", an archaic form of the participle "beigossen", from the verb "beigießen", "to pour". To make a long story short, bigos is something to which someone (probably some German) has added some kind of liquid.[1]

Now, the problem is that ever since the word bigos has been used in the Polish language, it had more to do with the action of chopping than with pouring. The earliest known mention is a bigos recipe found in a herbal by Stefan Falimirz published in Cracow in 1534, entitled Of Herbs and their Potency. It was a work on medicine rather than a cookbook, so this oldest known bigos wasn't so much a dish as a medicine against "Saint Valentine's illness", or epilepsy.

There are two interesting things we can notice here: first, 16th-century requirements regarding sample sizes in clinical studies were a lot less strict than they are today. And second, it was possible to make bigos without cabbage or sauerkraut. You didn't need a variety of meats either. All you needed to do to make bigos was to chop something (say, wolf lungs) up and season to make it sour, sweet and spicy.

A 1621 Polish-Latin-Greek dictionary defines "bigos" simply as ferculum ex concisis carnibus, or "a dish of chopped meat" and provides the word "siekanka" ("something chopped up") as a Polish synonym. It also gives "minutal" as the Latin equivalent. As it turns out, Poles were not the first to enjoy sweet-and-sour chopped-meat delicacies; these were already known to ancient Romans. We can find some recipes for minutal in De Re Coquinaria (On the Subject of Cooking), a cookbook that has been traditionally credited to Apicius, but is in fact a collection of formulae from various authors compiled in the 4th–5th centuries CE. What follows is a recipe for minutal ex praecoquis, or chopped pork with apricots.

I've found an interesting attempt at reconstruction of this dish. The author of the Pass the Garum blog, devoted to cooking according to ancient Roman recipes, hints that you can replace liquamen, or Roman fish sauce, with store-bought Thai nam pla mixed with reduced white-grape juice; and instead of tracta, or Roman flatbread, you can use cornstarch as an equally good thickener.

And here's a Polish recipe for "Jesuit bigos" from a manuscript cookbook written at the court of princes Radziwiłł at the end of the 17th century:

Nice! As you can see, this recipe is quite similar to the Roman one, even though it calls for beef, which Polish magnates valued more than pork. Again, we've got here a fusion of sour (wine, vinegar, lime, lemon), sweet (sugar, raisins, malmsey), spicy (pepper, cloves, more pepper) and fatty (butter, olives, more butter) flavours. This combination of tastes had not changed since ancient times and can be seen in all Polish recipes for bigos (and other dishes) from that time.

What's more, not only did Old Polish bigos contain not even a soupçon of cabbage, but even meat was only optional. As long as "bigos" meant "something chopped up", you could make it out of anything that could be chopped. So apart from veal, capon (castrated cock), wether mutton (castrated ram), rabbit, hazel grouse or beef marrow bigos, we also know recipes for carp, pike, crayfish, oyster or even crêpe bigos (or bigosek, a diminutive form often used back then).

As long as you don't overdo the wine and the vinegar, then even modern children would find it palatable! By the way, one must have always been wary when it comes to vinegar. This is how Wacław Potocki warned against lack of caution when seasoning your bigos with vinegar:

Apart from "bigos", there's also the quaint Polish verb "bigosować", which means "to chop" or "to hack". And it wasn't only used in culinary contexts; it also referred to one of the favourite methods of torture and execution used by Polish gentry; to "bigos someone up" was to hack him to pieces with sabres. "Bigos them up!" is a call we can find in the 17th-century diaries of Jan Chryzostom Pasek and in the historical novels by Henryk Sienkiewicz that Pasek inspired. Valiant Polish nobility apparently kept abreast of times and even learned to bigos with the use of firearms, as we can see in another of Wacław Potocki's poems, where he mentions "hot bigos of lead and gunpowder".

Centuries later, Polish President Bronisław Komorowski (a historian by training) made a reference to this tradition in his famous speech to the German Marshall Fund in Washington, D.C. 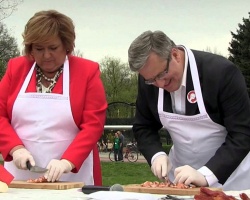 President Bronisław Komorowski and his wife chopping some meat up

The above translation is mine, but during the actual speech, by the time the president had got to the third phase, the poor interpreter got so lost that she rendered "bigosować" as "stewing". Well, bigos is a kind of stew, but it didn't make any sense in this context, so I'm not sure whether the American audience ever understood this short lecture on the history of Polish cuisine and Polish parliamentarism.

The 18th century introduced a kind of bigos that was a little more like the one we know today. It was made from a variety of meats, with exotic spices replaced by domestic herbs and veggies, but still no cabbage. We can find the following recipe in Kucharz doskonały (The Perfect Cook) by Wojciech Wielądko, the second-oldest fully-preserved cookbook printed in Polish:

But if you think that we're finally going to prove the Polish origin of one of Poland's most famous dishes, then think again. Wielądko didn't write about Polish cuisine; his book was a translation of La cuisinière bourgeoise by Menon. He modified the book's title to better suit his Polish readers' expectations (the cook in the original title is an urban woman, but the one in Wielądko's translation is a man of unspecified origin), but the recipes themselves remained French, even if much abridged. So does it mean that bigos is originally a French dish then? Yes and no. Wielądko simply used the word "bigos" as the Polish equivalent to what Menon referred to as "hachis" (pronounced ahˑshee and derived from the verb "hacher", "to chop", which is related to the English "hatchet"). We could probably trace the origins of that dish also back to the ancient Roman minutal. Minutal, hachis, salmigondis, hutsepot, hodgepodge, bigos... they all belong to one big family of chopped dishes, once featured on tables throughout Europe. Which is not surprising, if you think about it: chopping, dicing or mincing was the only way of processing meat before the first half of the 19th century, when the German inventor Karl Drais built the first meat grinder. It was only then that pâtés, sausages and fillings in the form of a uniform mass became possible.

Besides, as I've mentioned already, it wasn't only meat that was being chopped. Both in Menon's book and in Wielądko's translation we can find a recipe for a purely vegetarian dish made from diced root vegetables. Wielądko calls it "carrot-and-parsnip bigos".

And now it's time for my own interpretation of a 17th-century recipe for a genuine Old Polish bigos – without meat and without cabbage! I've started by cutting a cod fillet into bite-sized morsels and marinated them in a mixture of olive oil, apple vinegar, lime juice, honey, cinnamon and nutmeg. The least Old Polish element in this mix was honey, which I used instead of sugar, the favourite sweetener of the Polish nobles of yore. On the next day, I removed the fish from the marinade and baked it in an oven.

In a wok, I browned some chopped onion in butter and then added some (wait for it!) gooseberries (at this time of the year only frozen ones were availabe, but it doesn't matter in this case) as well as some port-soaked raisins and dried cranberries. Once the gooseberries were reduced to a pulp, I added the fish, some olives and heated the wok a little more. As for olives, they do crop up in Old Polish bigos recipes, but I think this dish would have been just as good without them.

The sides were purely my own idea, not based on any old recipes: sautéed buckwheat-flour drop noodles and caramelized kohlrabi on puréed parsley root. I told my guests that what they were having was a kind of bigos; they did notice the fish flavour, but were certain that they could also taste some sauerkraut.

In my next post we're going to see how bigos – finally, with cabbage! – kept evolving beyond its Old Polish stage.