Virtually every general-audience publication that however briefly retells the history of beer in Poland mentions two mandatory anecdotes. The one about Saint Piva of Warka we already dealt with before. This time, we're going to focus on the other one – about how Duke Lestek the White (also known as Leszek, the modern Polish spelling of his name) wriggled out of going on a crusade.

Singer-songwriter Jacek Kowalski even wrote a song about it. It was commissioned by the Żnin Brewery in the Paluki region, which until 2007 produced an unpasteurized beer called Leszek.

As with any such oft-repeated story, the question is: did it really happen?

A Game of the Cracow Throne[edit] 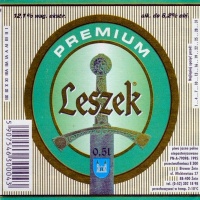 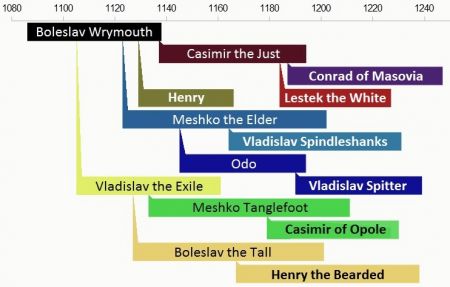 Just like the king of the Andals, the Rhoynar and the First Men has his power supported by the faith of the Seven, so did Polish dukes coöperate with the Catholic Church to strengthen their power. And as the popes at the time were really looking forward to freeing the Holy Land from the Saracens, the dukes could help their chances to win the Cracovian throne by participating (or at least by promising to participate) in a crusade. The crusade movement had been only moderately popular in Poland until then, but we know for instance that Henry, one of Lestek's uncles, did go on one, if not two crusades. Did Henry encourage his nephew to take the cross with tales of his overseas exploits? Unlikely, as he had died 20 years before Lestek was born.

What's more, the image of the crusade movement suffered in Lestek's lifetime after the Fourth Crusade had failed to even reach Palestine and settled on plundering the perfectly Christian Constantinople instead. This was followed by a Children's Crusade, which was just as bad an idea as it sounds. But when Pope Innocent III announced a new crusade in 1215, Lestek resolved to enroll anyway. Innocent promised a plenary (full) indulgence to anyone who would join the crusade himself or send an armed delegate and a partial indulgence for financial support. Taking the cross also gave you a kind of immunity, as any attack on a crusader was punishable by excommunication. The pope's protégé in Poland, Archbishop Henry Ketlich of Gnezno, had little trouble inducing a team of young Polish dukes to make a crusader's vow. The team consisted of Lestek and his brother Conrad, as well as their cousins, Casimir of Opole and Vladislav Spitter. Together they formed a coalition of junior dukes put together by Ketlich to wrest control of all Poland from the elder generation of Wrymouth's descendants. 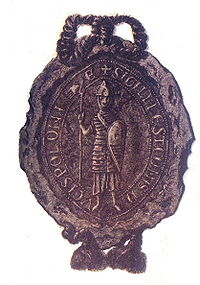 A seal of Lestek the White

But when the crusade eventually started two years later, only Casimir did actually join. For other dukes, the crusade had lost its appeal. Innocent III had died in 1216, leaving Ketlich without either influence in Rome or further interest in the crusade. Meanwhile, Lestek and Conrad had made peace with the elder dukes, Henry the Bearded and Vladislav Spindleshanks, so they no longer needed their crusader's immunity so much. And what about Spitter? Betrayed by Lestek, he had to run into exile from his spindle-shanked uncle, so crusades were definitely the last thing on his mind.

After this lengthy introduction, we come back to our anecdote at last. Did Pope Innocent III grant Lestek a dispensation from his crusader's vow? Probably not, as Innocent was already dead by the time the crusade started. But the new pope, Honorius III, did not forget about Lestek's vow and started to remind him that excommunication awaited not only those who attacked a crusader, but also those who failed to follow through on their obligation to take the cross. Lestek needed to come up with some excuse.

The letter in which Lestek allegedly explained to the pope that he could not travel to Palestine as that place lacked beer, without which he could not live, has not survived to our times. What has survived is a letter dated April 1221 from Honorius III to two Polish clergymen – Bishop Lawrence of Vratislav and Provost Peter of Glogov. And in this letter the pope does mention the excuses that Lestek had made to justify his no-show on the crusade. 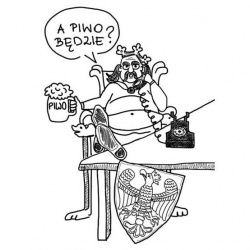 So it's true! It's this one brief mention in the papal letter that made future historians label Lestek as a lazy, obese drunk. Especially that "having changed habit into nature" sounds very much like a nice euphemism for "being an alcoholic". But there's a few things here that don't look right...

First of all, what kind of alcoholism makes you drink beer and mead, but stay away from wine? Secondly, how come the pope bought an excuse so flimsy? And does corporis gravedine gravis really mean "heavy in his body"? This Latin fragment could be also translated as "being full of catarrh" or "suffering from a heavy cold". Anyway, I suspect that Lestek was trying to excuse his failure to join the crusade with some grave illness, and the necessity to replace wine and water in his diet with beer and mead was not necessarily his personal preference, but a medical prescription. Yes, I know, neither a cold nor being overweight would let me get away with not showing up to work, but perhaps medieval attitudes to sick leaves were more relaxed?

It's also possible that the pope was simply being ironic. What he meant was perhaps something like, "look at this northern brute who promised to go on a crusade, but now says he doesn't feel like it! The fat drunken sloth who probably can't even live without those barbaric drinks like beer and mead!" But if this was the case, then what convinced the pope to forgive Lestek and not excommunicate him after all? Well, what could have worked was what the duke offered as a replacement.

That's right, with his effort and diligence, not with fire and sword! What Lestek proposed was to convert the pagan tribes of the Baltic Prussians to Christianity. But rather than conquer their territory and convert them by force, he would build a merchant town in their land and use it to export to them some of the goods they lacked, such as salt and iron. Only once the Prussians had swallowed the bait, would missionaries start to preach the Gospel to them. The pope didn't seem convinced that this unorthodox approach would work, but decided to give Lestek a chance nonetheless.

And that's it, as far the Lestek's weakness for alcoholic beverages is concerned. In this case, as Myth Busters would say, myth confirmed! But if you want to know, whether Lestek's plan of peaceful Christianization of the Prussians worked out, then read on.

It would seem that Lestek's plan was doomed to fail. Even Jon Snow's attitude towards the wildlings was never this liberal and he was still killed for siding with the enemy. And as a matter of fact – it did fail! In the years 1222–1223, Lestek, along with Conrad, Henry the Bearded and Swantopolk, Lestek's representative in Pomerania, twice travelled into Prussian territory and twice did they return with nothing. After the second failed mission, the dukes decided that for now, they would just set up something akin to the Night's Watch – a line of strongholds manned by knights from all parts of the kingdom to keep the wild— I mean, the Prussians at bay. The pope agreed to treat this force as a crusade and thus hold Lestek's and Conrad's vows fulfilled.

The three major differences between these Polish watchmen and the Night's Watch is that the former didn't require chastity vows, they didn't have a giant ice wall at their disposal and they didn't last eight thousand years, but only... less than two. One night the Prussians attacked one of the strongholds; some of the knights died defending it, while others ran for their lives. Back in the capital, this led to a civil war between House Odrovonsh, whose sons had died in the battle, and House Griffin, whose members were decried as cravens and traitors. The Griffins escaped (again) to Silesia, where they talked Henry the Bearded into capturing Cracow while Lestek was away and claiming the title of high duke for himself. Lestek retook Cracow only a week later, but while the dukes were duking it out, the neglected watch entirely collapsed. 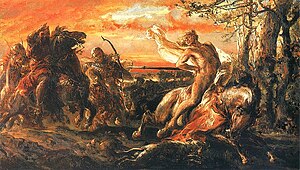 Lestek's death as painted by Jan Matejko in 1880

In 1227, Lestek called a summit of all Polish dukes at Gonsava in Paluki, the border region between Masovia, Greater Poland and Pomerania. We don't know exactly what points were on the agenda, but it most likely had something to do with ending the feud between Spitter and Spindleshanks over Greater Poland and bringing Swantopolk to heel, as he was trying to free Pomerania from Polish rule. Lestek from Cracow, Conrad from Masovia, Henry the Bearded from Silesia, Vladislav Spindleshanks from Greater Poland, as well as many bishops and great lords all came to Gonsava. Only two key participants were missing: Vladislav Spitter and Swantopolk. After almost two weeks, it was decided that there was no point waiting any longer and most people started heading back home. Lestek and Henry lingered on, though. Did they want to talk some things over in private or had they drunk so hard that they were unfit for a journey home (Henry had the same reputation as Lestek in this regard)? We don't know. But it was then, in the early morning of 24 November, when Spitter and Swantopolk finally showed up – along with their henchmen. Henry, whom they caught in his bed, was wounded, but it was his loyal knight, Peregrin of Weissenburg, who took the fatal blow. Meanwhile, Lestek was attacked while having a bath. Somehow this allegedly obese, hung-over forty-something was able to escape the assailants, run naked from the bathhouse to the stable, jump on a horse and ride off into a snow-covered forest (back then, the climate was colder and Poland was more forested). Unfortunately, the assassins caught up with him 2 kilometres away.

A year after Lestek's untimely death, but possibly still on his orders, a Dominican friar of House Odrovonsh set out from Cracow on a mission to Kiev. Better known as Saint Hyacinth, he is believed to be the one who brought the first recipe for pierogi on his way back to Poland.

A short time before that, Conrad concluded that his brother's peaceful approach towards the Prussians was going nowhere and it would be better to hire the Teutonic Knights to do the job of converting his pagan neighbours. It must have seemed like a good idea at the time; who would have known that he had just caused Poland a series of problems that would only end in 1945? For the time being, it just meant less trouble with the Prussians. It would only be the next generation of Polish dukes that had to face an invasion so terrifying, the Prussian raids would seem like a mild nuisance in comparison. Even the combined forces of the Teutonic Knights and the sons of Lestek and Henry the Bearded were unable to stop the hosts led by the Night King— I mean, Baidar, grandson of Genghis Khan (who, incidentally, had died the same year as Lestek). Apart from fire and destruction, did these Mongol-Tatar hordes also bring recipes for tartar sauce and steak tartare? Well, that's a topic for another post.